The Peace of Return

Was this reality? Was I really on route to the city that had once given me butterflies?!

My first experience in Rome was a lovely weekend spent sight seeing, eating Gelato, and walking for miles on end, and as expected, revisiting, my stomach started to somersault, the smile had re-appeared, and I began to turn into the excited little adventure girl I had been on my last visit.

I walked out of the train station, stood and took a deep breath; consuming all the smells, sights, sounds and tastes. Letting the charm of the city overwhelm me once again.

It was fairly late so we literally checked into our hotel and set our sights on the first restaurant we could find. In search of Roman style Pizza, (Roman style is thinner with a crispy base, and Napolitian style is thicker with a softer base…being in Rome, I had to try the first!) we discovered Florian’s Café just around the corner. An old guy welcomed with a “Ciao Belli”, gestured to the seating inside or out, and carried on clicking and clanking the Espresso machine. We took a table outside as the weather was far from that in Berlin. And yes, I ordered the Roman style Pizza. 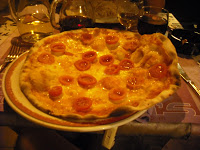 The two waiters made such a fuss over us and remained our friends for the rest of our stay (I think I ended up having about three Espressos per day from this place)… Panna Cotta for dessert? 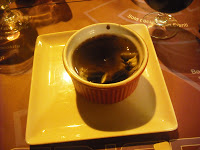 Need I have been asked?!

Afterwards, we took a stroll into the historical centre. I remembered the way. Although Rosie was not convinced that ‘I know Rome like the back of my hand’.

I mean, we may not have taken the fastest or easiest route to the Trevi Fountains, but we got there. Witnessing it lit up in all its glory, I followed tradition and tossed a coin into the waters, praying that I’d find a way back. Again.

Being so close to a little Irish bar I knew had a good atmosphere, I suggested that we head there. We got talking to a few Americans who then took us to the river; lined with bars and pop up restaurants during the summer months it’s one place where you’ll see locals and tourists mingling. We got our cocktails and plonked ourselves down on huge Moroccan style floor cushions under the candle light. Just the kind of relaxation I needed before sightseeing the next day.

One thing to be repeated from my first visit was to sleep with the window wide open… that was not a choice this time as we’d opted for a no air-con room (fools!). I’ve always slept better with noise; the bustle and liveliness are carried faintly through the night up from the street… Just a shame there was no breeze with it!

Together, we visited, and without sounding like a travel guide:

The Vatican, this time I went into the museums and saw the Sistine Chapel – AMAZING! I could have spent hours there once I’d actually reached it! I was jostled around in a herd of hot, sweaty, stop to take a photo of every little thing on display, tourists.

The Pantheon. Still my favourite thing in Rome. Its dominance over the square is jolting; you walk through the little streets into this fairly small square, and there it is! You’re taken aback, questioning “How can something so big and bold be here!? Amongst these tiny delicate streets?!”

The Colosseo, although this time I didn’t go inside. I perched myself in the sun and read a book whilst waiting for Rosie.

The little island in the river, with the best Ice Cream shop ever! Again, the Bacio Gelato.

The Monumento a Vittorio Emanuele ll, which I have nicknamed ‘The Big White House’ (I had previously been to the roof of this building for a panoramic view of the city, definitely not worth a miss). 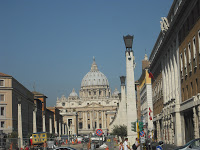 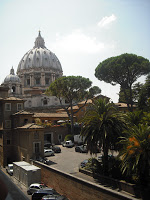 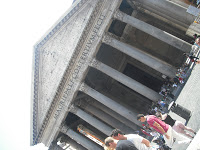 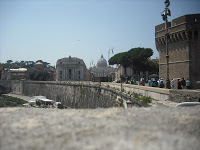 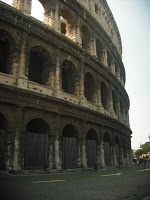 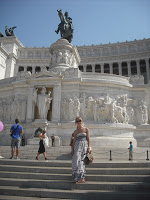 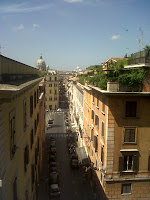 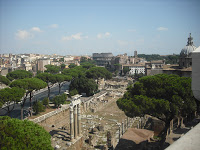 …And everything in between.

Feeling a little ‘Ah! Why not do everything once” I had my palm read by one of the gypsys near to the restaurant. She told me I’d live a long life and that I’d become rich from my creative ideas… (probably spiel she feeds every tourist). I am still working on this!

We ate at Bar Navona – why? Mainly because Dave and I had eaten there before and the guy getting the custom in is hilarious! He comes up to you as soon as you start to look at the outside menu. Now, usually I hate this, but he gives this speech, somewhere along the lines of…”Welcome to the right choice! You know why you made the right choice?! Because this is Navona Square, and this *scans arm to present the restaurant* is Bar Navona”. Without fail, to every customer.

We enjoyed pasta, Spaghetti Carbonara, with a bottle of red wine, and on the way back to the hotel I consumed my body weight in Bacio Gelato. Again.

Half of the time spent in Rome, Rosie and I parted for the days, I took long walks, fuelled by my new found love of the syrupy Italian Espresso. She went sightseeing, and I tried to find places I hadn’t seen when there the previous time. Walking around aimlessly was joyful, I could soak in my surroundings, most of all when sitting outside restaurants reading, learning Italian and watching the world go by.

The charm with Rome is that wherever you look there is something of importance, something to appreciate. Whether it is a historical monument, a ruin, a church, or another secluded cobbled back street with shutters on every apartment door and window, lined with flower boxes and the occasional Roman man leaning on the balcony railing toking on a cigarette. A local going about their every day life amidst the chaos, the endless queuing traffic and the sound of the chattery language over the beeping of Vespa horns, the women dressed as though they are straight from a catwalk show, and the handsome men, expressing with their hands, loving through their food and wine. It’s as though an accordion should be playing in the background the whole time you are there.

I felt totally at peace. I absorbed it all, let out that deep breath and smiled. As John Lennon said “It was like being in the eye of a hurricane. You’d wake up in a concert and think, Wow, how did I get here?”.

Upon leaving, I knew I’d be asking myself the same question again soon.