The Warm Heart of Africa

So, what better place to start than Africa?!

The university had this planned for a while and I was looking forward to it with great enthusiasm. I thought I was different, daring even, and above all…free!

Malawi is one of the poorest places in the world, with the economy reling heavily on tobacco and agriculture exports, it has been only in the last 10 years that the government have recognised this as an issue and have been trying to promote tourism. And so, our group visited Dedza, in southern Malawi, in order to research the potential tourism and provide customer skills training in the hope to significantly alleviate poverty in the area.

None of us knew what to expect, and we had been warned of ‘serious culture shock’.

After a loooooong flight and seeing Mount Kilimanjaro from the air, we arrived at Panjira Lodge. ‘Wow!’ I thought…’this IS basic, and run down’, although not as bad as I had anticipated. The sun went down pretty fast in Malawi, and the first thing we noticed were the sheer amount of glowing stars; I had never seen anything like it! It was beautiful. The town was scary to be alone in at night, mainly due to having no street lights, and being the only white people there, and we felt a little uneasy with our new surroundings. When we returned to the lodge, we were all extremely tired, so settled down with a few beers and ate.

One of the girls that was on the trip with us didn’t like bones or skin on her food….so she obviously found it very hard to eat the chicken or the fish that were presented… 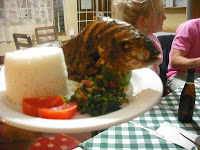 …luckily I have no problem with food or I would have been starving!

The job we went went to do, was to collect information for the VisitDedza charity website; which allows people all over the world to see that Dedza is a beautiful destination with lots to offer (Safari, lake activities, Rock Art sites, and being a relativly safe place for tourists to visit). The aim was to then conduct training sesssions at the new visitors centre, for the Chongoni Rock Art sites. The centre was going to provide tourists with information on the local area, associating local craftspeople, by providing workshops for visitors and also acting as the start point for guides. All staff would be local townspeople.

Two years into being built, we arrived, keen to look inside and train the employees, so imagine our surprise to see it barely even started!

When we questioned the reason, it was said to be due to government funds being needed in other areas, such as education, and local people taking the supporting beams; to be used as firewood. Whether the visitors centre will be used enough is also one worth asking; with it being so far out of the town centre (NOT walking distance), and this being the provided transport…

…no seatbelts, crazy driving, god forsaken bumpy dirt tracks, and the road being inaccesible by car in wet season….we are skeptical.

We were taken to 2 Rock Art sites. Only 4 out of 127 are open to the public and are very hard to locate without a guide as they are still used in ceremonies. Villiage children ran behind our jeeps and crowded round us…calling out ‘Azungo! which literally translates as ‘white man’. We talked about favorite lessons at school and their homelife, mainly farming. The group took a lot of photos, which every child wanted to then look at themselves, a site I don’t think they often see, due to not having glass windows or mirrors within the home. The locals seemed overly happy to see us, and especially seemed impressed that I knew how to play a simple version of their ‘seed game’ (a game I was taught by my Nana when younger).

It was discovered that the people of Malawi generally do not understand tourists, or why they would want to walk 10miles to see a view, just to say they had walked the path out of freewill, or why visitors would buy an everyday pot or pan as a souvinier.

After the research days the group planned a training day, which took place at our accomodation, we had decided, along with the NorwichDedza charity chairman, that it would be best to train the local business peoples and the to be visitor centre staffs on how to deal with tourists. As a result, these people were rewarded with certificates, and our session really did seem as though it had a positive effect on the people who attended. Although, I am not so sure that the visitor centre staffs will remember our advice for when the centre is complete.

Feeling that we had completed what we had set out to do, we dropped our donations to the local schools (a box each of footballs, pens, pencils, workbooks etc). They were so grateful they didn’t have to kick around a make-shift plastic-bag ball any longer.

Other perks of Dedza town were; climbing Dedza mountain, then taking the ‘ridge walk’ to the summit, of which only 7 of the group made it. So proud of myself!

And visiting the Dedza Pottery, known for it’s famous handcrafted tableware and the tea it serves. This is where I first tasted the local beer ‘Kuche Kuche’, accomponied by my first ever tasting of goat, so tender it just fell from the bone, with such a rich taste. Probably the same goat’s head we had seen hanging from the market the day before.

We had been daring enough to go to the back stalls, and saw hanging animal heads, witch doctors, and a rastafarian with one eye propsed to me. Eventful…for a market day!

So many amazing memories! But the main one I picture when thinking back to my experience in Dedza town is the pure kindness and welcomingness of the people who live there. They have nothing, yet they are so happy… we, as westeners, say that Africa is behind in development, but maybe it doesn’t do us good, maybe we have not benefited; we are greedy, and when we get what we want, we no longer need it. One thing that I always make sure of from Africa onwards, is that I eat everything on my plate when my mum puts it infront of me.

As my Nana always used to say “Waste not, want not”.

All in all, I think I learnt a lot more from Malawian people than what I taught them!