I haven’t blogged for a while so a quick thanks for ‘Bearing with Me!’. And this leads me on to the next part of my travels.

Framed by green trees, the glacier river Aare wraps itself around this pocket sized city. It passes the Marzilli-Bad, the Parliament Building, the Einstein Museum, the Munster platform, the Young Boys football ground, the Bear Pits and the Rose Garden. All the things I wanted to see whilst visiting the capital of Switzerland.

Being well known for having housed Bears in the city since 1857 this was my first stop. Although, instead of the concrete Bear Pit I was expecting to see, they have been relocated to an enclosure with green grass, logs and a bathing pool. Complete with a view of Bern! 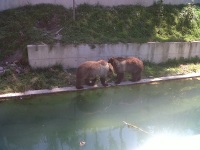 After hours of watching them play around I made my way up to the Rose Garden above.

Most people made their way up the steep hill with no interest apart from the panaramic view over the city, but I was fascinated by the perfectly formed flowers within the grounds; hundreds of them on display! Feeling like a princess in castle gardens, I had to look at every single variety.

Sticking with panoramic views, I made my way to the Munster platform. From the top is a sudden drop from which a glass elevator takes tourists to the area below. I stopped here, on the platform, for a tea, a slice of tart (almost too good I forgot to take a photograph before I ate it all!) and read my book whilst taking in the views.

Rosie and I decided we wouldn’t be extravagant with food until we reached Paris, so Rosie (being a good cook) made us pasta in the Hostel. Afterwards, we went in search of a roof top bar. Although finding it was an issue it was worth it!

From the bamboo bar we ordered cocktails, walked through the sand and chose to lay on sun loungers, perfectly placed with a sunset view of the Alps. After spending a whole day in the city this was the first time I’d even noticed the snow topped mountains in the distance.

A million miles away from the hot tubs that were bubbling away behind us. 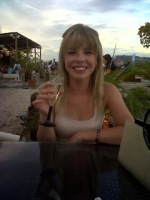 We’d arrived in Bern unaware that the usually sleepy city was full of buskers, all gathered together for the street music festival. With my love for live bands I couldn’t sit and relax for long, so we joined the crowds, moving between food stalls to the next performance.

Some performances were strange… but one band that blew me away were Micha Sportelli. I got their signed album 🙂

Setting my alarm for 8am, I made my way to the Einstein house and the museum, both just a short walk away from the clock tower on which he based the theory of relativity. Learning about his life’s work was incredible. I literally lost track of time.

Next on the list was the Parliament building, which houses a 214 bulb chandelier. I HAD to see it!

Unfortunately I’d forgotten my passport and couldn’t get in, so instead I walked through the archway of the main doors to discover another panoramic view of the city, including a view of the local park area (the Marzili-bad), followed by the river and then the Swiss alps in the far distance. And I came to see a chandelier!?

Every inch of grass along the Mazili-bad was covered with towels, bags, and muscly, Speedo wearing men playing frisbee (I have never understood Speedos!). I found Rosie and got down to my bikini. We sat, chatted and ate ice cream.

We couldn’t leave without trying a Swiss tradition. So we decided to take the plunge into the river and allow our selves to be carried past the sights by the rushing water…

…Knee deep, I see a dead mouse floating past and have second thoughts! Maaaaaaaybe not!

Instead, we take the train to Paris.