My feet first touched French soil years ago, but this time was very different. I was in Paris!

For years, I’d pictured couples kissing in the windows of romantic restaurants, pretty women, their arms full of designer shopping bags, Champagne flowing, plates of classic French cuisine being served, expensive hotel suites with posh cars parked outside, & poetic words being whispered between couples as they walked hand in hand along the famous river Seine.

Well… there’s a reason they call it the City of Love, right?!

Of course the above is just every girls dream of Paris. In reality, we arrived by train to find a small, cramped, run down, overpriced hotel… with a cubicle toilet in the same room. Nothing like privacy!

We were hoping that a large glass of Parisian wine, with a side of Olives, from the local wine bar, Vino-TK, would make the city more attractive. It did. It was a bar renowned for its wines & I was loving every sip!

Rising early and leaving Rosie in bed, I walked along the Champs-Élysées staring in all the shop windows as I made my way to the Arch de Triumph, and then to the Eiffel Tower. This is where William and I met. (No, William is not a man I fell in love with or anything like that, before you get ahead of yourselves!) Rosie & I had met William on the train from Florence & he happened to be in Paris at the same time as us and loved food as much as me. 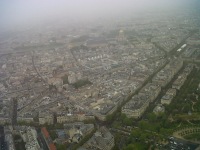 Deciding that taking the lift all the way to the top wouldnt be “doing it properly”… we climbed the entire 669 steps to the second platform and then took the lift to the very top. WOW! What a view!

Champagne!! A well deserved reward. As if I needed an excuse 😉

Good job I’d had a tipple; on the way down I kept freaking myself out… ‘What if it collapsed!?’ Deep breaths & concentrate on your footing B! 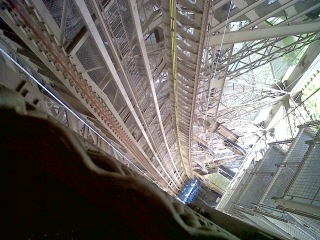 With my feet safely on the ground, I knelt down & kissed the floor! No, I didn’t really… but I felt like it. Now get me some more Champagne!

On the walk to the Lurve we stopped in a French restaurant & ordered Snails, Beef Tar Tar & French Onion Soup. I was in Paris. I had to try everything French.

I’m glad I did… it was best soup I have ever tried! The way they’d toasted the bread & cheese as a layer on top of the soup base instead of a poncy crouton was enough for me!

Rosie had spent all morning amongst the thousand artworks within the Louvre, so we made a start by heading straight to the Mona Lisa, the Winged Victory & the Wedding Feast, as these were the main peices I wanted to see.

That evening, we wondered around & found Les Galopins Nation, a lovely classic French Brasserie with tables full of locals. We sat outside & I ordred the Foie Gras. Although completely diagreeing with the production of it, I HAD to see what the fuss was all about. Yes, it was worth the moral torture I gave myself for days afterwards.

Thinking that endorsing upon an artwork adventure would cure my guilt, I spent the next day in the Louvre & Musee De L’Orangerie. Yes, you could spend a lifetime in there with its corridor mazes leading you to its beautiful antiques & precious sculptures, and I enjoyed remebering why I loved studying art so much at A level.

That evening we visited Les Galopins Nation again, where I’m pretty sure I tried the best Dijon sauce, with my Rare Steak, and about a gallon of Red Wine!

The next day we visited Montmartre & climed the hill topped with the white domed basilica of Sacre Coeur, trimmed by the Moulin Rouge & famous for it’s talented artists lining every inch of the way. This was the part of city that actually looked like the Paris I had imagined. It’s an odd looking place full of eccentric people, yet still oozed class. This is where I stopped at Le ConSulaT & found my prince! In the form of a Frog…

For our last night in Paris we found a typical touristy restaurant near the Eiffel tower (more American than French). I hurried through my Pizza & Icecream so that we could make our way once again to see the beautifully lit tower against the starry night (Yes, that was Van Gogh inspired).

Here, a group of tourists who were looking for a bar invited us to join them. I wasn’t too fussed but Rosie liked the fittie model so we joined them. Not being able to find a bar close by, & being tired, I navigated the Metro back to the hotel.

Although I’d had fun, I had much preferred the good old days of boarding the family car & crossing the Channel, driving another 6 hours to find a camp site in the middle of nowhere. Setting up camp for the night & then finding a cosy traditional French restaurant close by, where Mum would give it her best attempt to speak French to everyone she met, whilst more sounding like Del Boy from Only Fools & Horses.

I found my seat on the plane destined for England. How could this city possibly capture my heart?!

Rome already had it.